The imposing play equipment in the form of an almost 20 feet high climbing tower will catch your eye even from a distance. The tower shines in resplendent red, yellow and orange from the newly designed Platz der Begegnung in Heidelberg. Here on the eastern outskirts of the town, where the Schlierbach valley gently slopes down towards the Neckar River, is the Schlierbach district. A development of mainly detached urban villas extends up the steep slope, while down in the valley, Heidelberg’s main artery – consisting of the S-Bahn (suburban railway) and Bundesstraße (A-road) 37 – pulsates along the Neckar.

In the lower part of the Schlierbach slope, just above the Schlierbach-Ziegelhausen S-Bahn station, there has been the Platz der Begegnung since October 2019 – a plateau embedded in the slope, consisting of a playground, a boules court and benches. Here, citizens of all ages can meet, relax, exercise and exchange ideas.

“This is exactly what the city of Heidelberg had in mind,” explains Friedhelm Natzschka, who as a landscape architect was responsible for designing the Platz der Begegnung, “A unique place with a distinctive character was to be created that would benefit the population. A place of encounter in an area where people have previously hardly stopped and lingered. A village square outside the centre.”

The main part of the newly designed square is a fortified area of almost 3,500 square feet, which is shaped like an egg from a bird’s eye view. This shape lends an organic appeal to the square and at the same time contrasts it with the rather striking lines of the surroundings. From here, visitors can enjoy a splendid view of the Neckar valley below and the green village structure of the Ziegelhausen district on the opposite slope. Benches invite visitors to rest and linger.

The highlight of the square is the climbing tower, which is located in the “yolk” area of the square. Not only because it offers a wide range of particularly exciting activities, but also because its modern and sculptural design brings a breath of fresh air to the Platz der Begegnung. The combination of curved and straight tubes in different thicknesses reveals a twist in the façade. Resembling the structure of DNA, the play structure spirals up into the sky. The organic shapes of the round tubes and spheres complement the overall appearance of the egg-shaped square.

The climbing structure can be ascended via a three-dimensional net made of ropes inside the tower. In this way, children can climb to a height of over 13 feet and change their perspective by looking at the “world” from above. At the same time, the transparent structure allows constant eye contact with the parents on the ground. From the parents’ point of view, this makes for easy supervision. A box slide provides a speedy and exciting descent down to the ground.

“The aim was to create a real attraction for the square by installing this extraordinary play equipment. The tower not only serves as a lookout over the Neckar valley, but also draws the necessary attention to the square by being visible from afar,” says Natzschka. The striking colour scheme of red and orange tubes and the yellow-coloured net also adds to this. At the same time, the tower blends in with its surroundings by picking up the hues of the reddish flooring of the square and the plants.

Another aspect in choosing the play equipment was the size of the play volume in relation to the floor space. “Which is ideal in the case of the DNA Tower,” thinks the landscape architect, “By making optimal use of its height with the spatial net, the tower can accommodate many children at once despite its small diameter of just over nine feet.”

Playing together on one device in turn promotes social interaction among children. Through interactive play, they develop social skills, learn to show consideration for each other or help each other. This is exactly the intention of the overall concept: a place of encounter.

The “Duck Jibe” spinning element attached to the tower provides plenty of variety on the ground. It simulates a surfing manoeuvre and thus also attracts older children.

In addition to the playground, the look-out benches and the boules court, the “Schlierbach Egg” can also be used for events such as flea markets or small parties, thus providing another place of encounter. As the site is wheelchair-accessible, people of all abilities can come together.

After about nine months of construction, the Platz der Begegnung was completed in October 2019. The opening of the square was met with great enthusiasm by the numerous residents who attended and gives hope that the “Schlierbach Egg” will remain a place of encounter in the long term. 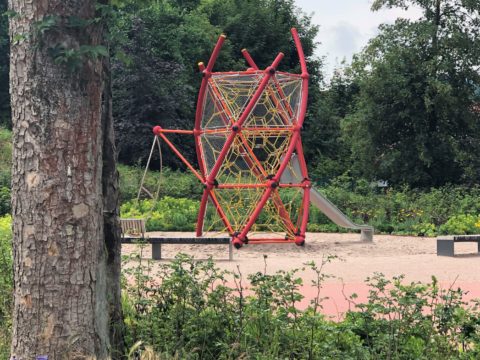 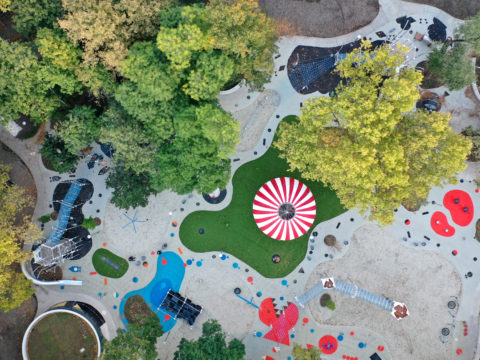