Playground for a Housing Association

With its own housing stock of around 60,000 apartments, the Berlin-based housing association HOWOGE is one of the ten largest landlords in Germany. For more than 25 years, the company has stood for sustainable inventory development, innovative housing concepts, and social engagement at various locations in Berlin. In the course of the periodic repair of the façade of a block of flats with 422 apartments in Berlin’s Hohenschönhausen district, the outdoor area was also redesigned. A varied children’s playground was created in the courtyard of the building complex. Due to the public accessibility of the farm, the play area not only benefits the immediate residents but also offers the entire living environment – including adjoining daycare centers – an exciting destination for play and movement.

“It was important to me to have a playground that caters to the needs of all ages,” said Oliver Pohlann, Landscape Architect in charge and Project Manager of Landscaping at HOWOGE. “Both the very young children and the older ones in adolescence should get their money’s worth.”

Consequently, the playground consists of play equipment with different requirements. At the heart of the toddler area is the Roo M.03 playhouse of the Spooky Rookies series, which is specifically geared to the needs of toddlers under the age of 3 for early psychomotor and social development. For example, the mud tables in the lower part of the playhouse invite you to role-play, which promotes language and social skills in a playful way. An ascent ramp makes it possible to reach the upper area of the house before descending the child-friendly slide – a form of exercise that has a positive effect on spatial perception and improved balance and coordination skills of small children.

The highlight of the play area for the “big ones” is a combination of the wooden playhouses Woodville,in which two different “shacks” share a common post. The larger of the two shacks is equipped with a transitional network, which is combined with an access net. The two shacks are connected through a balcony that can be climbed via a rope ladder or using the rocking-plate ascent. “The promotion possibilities are deliberately chosen so that they offer different levels of difficulty and also offer an exciting challenge for older children,” says Pohlann. “Even when choosing colors, it was important to me that the ropes, balls, clamps and roofs look as interesting and appealing as possible. At the same time, of course, the play equipment should fit in color with the new façade design of the adjoining apartment blocks.”

Responsible for the development of Woodville at the Berliner Seilfabrik is Katharina Hilger, engineer of the Berlin Creative Center: “My personal highlight of the Woodville playground equipment is the constructive and elegant wood protection. Both from above and from below, the wood is protected by other materials. The elevation is part of the design and the round logs do not end in the usual metal post shoes. In addition, I am pleased about the hybrid character of individual components. This means that the parts that are subject to heavy loads when playing do not connect directly to the wood, but to stainless steel pipes, which are much more stable and resistant – and thus contribute to the longevity of playground equipment.

Rounding out the playground are two play points of the Berlin product group URBAN DESIGN. The double swing Swingo.2.4 allows two children to swing at the same time and was set for Pohlann from the beginning: “Rocking is important for a playground, it always works!”

In addition to its stylish organic design, the rocker abacus impresses with three sliding weight balls. Depending on the weight ratio of the users, these can be shifted so that people of different weights can be balanced and swung together. At the same time, the play point illustrates essential physical relationships in terms of gravity and balance. Here the children have the opportunity to get in contact with the scientific laws in a playful way.

The Episcopal School in Dallas, TX

The Episcopal School Project in Dallas,Texas is featured as a Project of the Month because of the innovative way that… END_OF_DOCUMENT_TOKEN_TO_BE_REPLACED 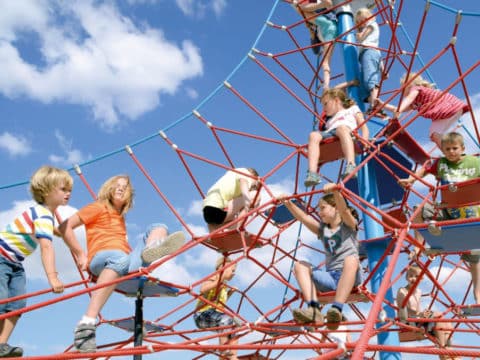